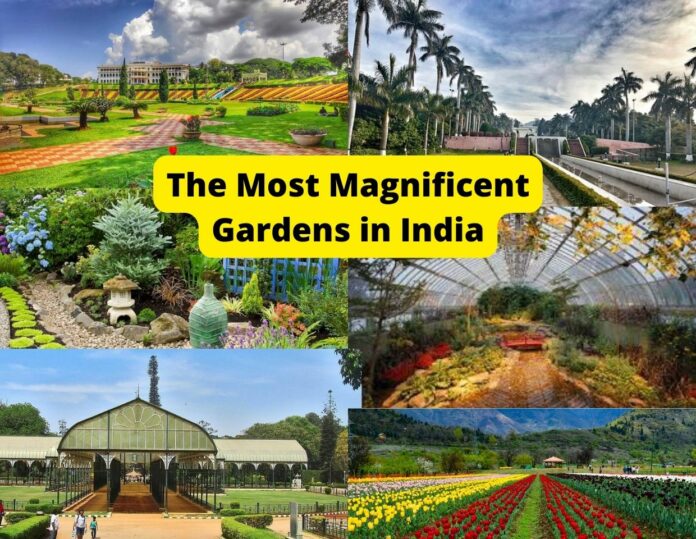 India has no shortage of natural beauty and resources. Mountains, waterfalls, lakes, deserts, rivers, forests — the country is blessed with nature. But the quest for beauty among humans is not limited to the natural world. Therefore, they set up their own places of worship. Gardens are such places where beauty is worshiped, where the souls of the people feel comfortable approaching nature. From eons the rajas, maharajas and emperors of India have been creating beautiful gardens adorned with flowers, plants and natural resources such as waterfalls, lakes or ponds. . Each has its own unique charm.Who does not love to walk in a beautiful garden? A refreshing retreat from the ordinary, everyday life. Here, we look at the most beautiful gardens in India:-

Located behind the majestic Dal Lake, the Indira Gandhi Memorial Tulip garden is one of its kind in India. It is located on the hills of the Zabarwan Range in Srinagar. It is known as the largest tulip garden in Asia, spread over 75 hectares. The garden was opened to visitors and the general public in 2007. This beautiful garden has seven colorful tulip flowers. In addition to the tulip, Hyacinths, daffodils and ranunculus flowers also add to the beauty of the garden. Another highlight of the tulip garden is the annual Tulip Festival, organized in April. It is visited by thousands of travelers and florists. A variety of tulip flowers are displayed during the ceremony. Plan your visit during the spring to admire this fascinating beauty of the Kashmir region. The garden is easily accessible from Srinagar by cable. It is 8 km from Lalchowk Srinagar. The train station near the airport is in Srinagar.

Kashmir’s largest Mughal garden, Shalimar Bagh is located on the shores of Dal Lake. Presented by Mughal emperor Jahangir for his queen Noor Jahan. Shalimar Garden is also known as Farah Baksh and Faiz Baksh. The 31-hectare garden building is inspired by Persian (Iranian) gardens. It includes three terraces with beautiful flowers. The outer part of the garden, called Diwan-e-Aam, was open to the public. In the center of the garden was Diwan-e-Khas, accessible to visitors to the court. The third floor was designed for women from the royal family. Shalimar Bagh is one of the most beautiful Mughal gardens in India. Surrounded by tall Chinar trees, the garden offers a spectacular view of Dal Lake. It is a 25 minute walk from Lal Chowk (15 km) to Srinagar.

Located on the high and low plateau of Doddabetta, Government Botanical Garden in Ooty is one of the most beautiful gardens in India.It was established in British India in 1848. William Graham McIvor, a Scottish farmer, was the builder of the Ooty garden.Covering 55 acres, this large garden is divided into six sections. Lower Garden, Italian Garden, New Garden, Conservatory, Fountain Terrace and Nurseries are six separate categories.A great feature of the Lower Garden is a map of the Indian Union made up of various plants. The Italian Garden was occupied during World War I by Italian prisoners.The New Garden is a newly heard section that includes a rose garden, well-designed flower beds and symbols of the Indian Government and the Tamilnadu Government.In 1912, a zoo was built to accommodate a wide variety of flowering plants.Nursery houses about 300 meters above the Lower Garden. There are glass houses for breeding and growing of rare plant species, such as ferns, cacti and orchids.Visiting this garden offers a great opportunity to experience the life of exotic and local plants.

With a vast green space covering 240 hectares, the Lalbagh Botanical Garden provides much-needed breathing space in the bustling city of Bengaluru.The garden was originally created by Hyder Ali, who ruled the Mysore Empire in the mid-18th century. His son Tipu Sultan expanded and adorned the rows of the Mughal gardens of Kashmir.With a variety of exotic and exotic plants on display, Lalbagh is one of the most beautiful gardens in India.The 3000-year-old large glass and granite quarry are the park’s most fascinating features. The granite rock, also known as Lalbagh rock, is a gemstone.It is also famous for hosting two annual flower shows, during Republic Day and Independence Day.Walking through this beautiful garden offers the opportunity to immerse yourself in the pure beauty of nature. You can buy shoots in the Garden center located in the park.The Lalbagh municipal station serves as the nearest municipal station in the garden. Government buses also travel from other parts of the city to the garden.

Yadavindra Gardens, one of the most beautiful Mughal gardens in India, dates back to the 17th century. Spreading over 100 hectares, the garden is located in the town of Pinjore in Haryana. It is also called Pinjore Gardens.Mughal ruler Aurangzeb built the garden as a summer refuge. The architectural garden design was done by Nawab Fidai Khan, who was Aurangzeb’s brother.During the 19th century in British India, the King of Patiala controlled this piece of land. It was used for growing roses in order to make perfumes for the king.The garden was finally restored to its former glory by King Yadavindra Singh of the princely district of Patiala. In his honor, the garden was renamed Yadavindra Garden.The Shish Mahal, a Rajasthan-Mughal-style palace, is located at a very high point. There is the Rang Mahal on the second floor and the Jal mahal on the third floor.It also has an open theater in one of the fields. At night, the illuminated barn offers amazing views of monuments and gardens.Riding a luxury train in a complex area is the best way to explore this beautiful garden. The garden also hosts the famous Pinjore Baisakhi Festival in April. It is easily accessible from Chandigarh (22 km) by road.

Spreading 60 acres inside the Krishnaraja Sagar dam (KRS dam), the Brindavan gardens are 21 miles from the city of Mysore. The dam is part of the KRS dam built by Krishnaraja Wodeyar IV across the Kaveri River, one of India’s most famous rivers. garden. Contemplating his idea in 1927, it took 5 years to complete his garden. Inspired by the Lalbagh Botanical garden in Bengaluru. Mandya District in Karnataka.

Thousands of sculptures made of discarded and discarded material are a great painting for visitors. The spacious garden includes courtyards, man-made waterfalls, parks, clean walkways and an open theater. Nek Chand Saini, a humble transportation officer and a learned artist, was the mastermind behind the rock garden. She became pregnant and secretly worked on the garden for a period of about 10 years until it was discovered by the city authorities in 1975. This was found to be an illegal construction built in a part of the state land. After much deliberation, construction was legalized and the garden was allowed to be open to the public. Since then, Nek Chand’s creation has grown from a 12-hectare site to a 40-hectare garden kingdom. The tour of this garden reflects the imagination of the artist and the love of the creator.This magnificent garden should have your own travel plan when you visit Chandigarh. The rock garden is located 7 km from Chandigarh railway station and is about 15 minutes drive.