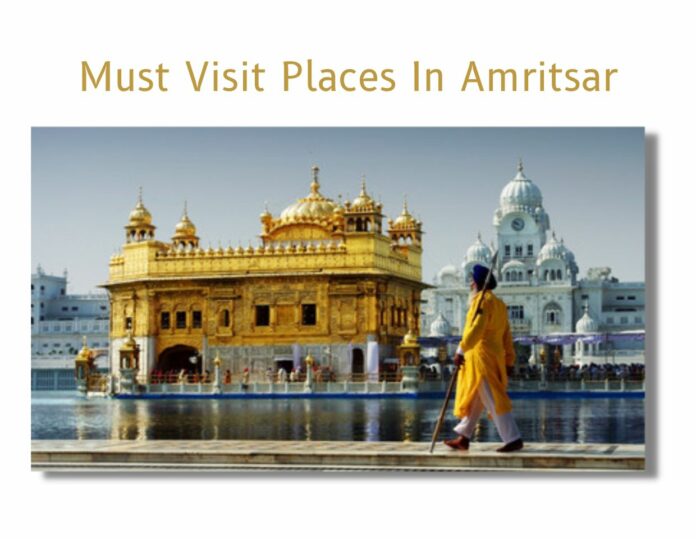 Amritsar was probably founded as recently as the 16th century by Guru Ram Das, the fourth Sikh guru. However, the myth creates a mythical link between the place and the Hindu song Ramayana. Amritsar is believed to be the ashram site of Maharishi Valmiki, where Sita gave birth to his twins, Lav and Kush. Combined with the history of Sikhism, the city is home to the Golden Temple, a sacred place for the Sikhs. At the same time, Jallianwala Bagh highlights Amritsar’s important role in the country’s liberation struggle. Exciting myths, religious buildings, historical buildings, bustling markets, colorful festivals, and delicious food all come together to be marked as a fascinating tourist attraction.

If you are planning a trip to this blessed city, here is your guide to all the wonderful places worth visiting and spending time on.

Some of the Must Visit Places in Amritsar are:

Amritsar’s crown jewel, the Golden Temple, is undoubtedly its center of attraction. Built-in the 16th century, it is an open house of worship for people of all walks of life and churchgoers. It is also known as the Sri Harmandir Sahib or Darbar Sahib and is one of the most visited places in India. The sanctuary boasts magnificent architecture and a unique Hindu and Islamic art styles blend. Decorating the temple’s interior walls with precious stones, the work of Meenakari, and the work of glass are beautiful in your eyes. The peaceful waters surrounding the temple enhance its beauty. With its golden glow and harmonious aura, the sanctuary is a perfect image of tranquility and eternal bliss.

The Guru Granth Sahib, a sacred book of the Sikh religion, is kept inside this Gurdwara during the day and taken to Akal Takht at night. The highlight of the Langar temple – is a free vegetarian meal served to each guest. Be sure to cover your head as you enter the sanctuary, as is the custom in many places of worship.

A rise in patriotism often marks a visit to the Wagah Border. Located about 30 kilometers from Amritsar, Wagah is the only border crossing between India and Pakistan. Every evening, the border turns into a festival grounds before sunset and attracts many tourists. It is a time when soldiers from both countries participate in the Beating Retreat and Change of Guard celebrations. It is a daily practice where soldiers’ lowering of the national flag takes place on both sides of the border, accompanied by intense and rapid military exercises. This practice has been going on since 1959. Every event is a colorful gift for guests. Since seats are not reserved, get there at least one hour before the event starts and carry binoculars for better visibility.

Perhaps there is no other monument in India that paints a grim story of the liberation struggle like Jallainwala Bagh. Spreading over 6.5 acres (6 ha), the community garden remains a testament to the horrific massacre perpetrated by the British Army on unarmed Indians. Nearly a hundred years ago, in the year 1919, when British troops under General Dyer’s command fired a rally in a peaceful congregation of men, women, and children in the area and left hundreds dead. A large stone monument in the garden is a stark reminder of the dark day in the history of Indian liberation. Even today, you can see bullet marks on the side of the garden walls and the fountain where a few people who had jumped died on that fateful day. Jallianwala Bagh is a place to visit where you can go through the dark chapter in the country’s liberation struggle and honor the martyrs. If you visit the area in the evening, you can watch the light and sound show again, which creates a shocking experience.

Gobindgarh Fort, which covers 43 hectares, is a landmark of Amritsar. Following its origins in the 18th century, the castle has remained a testament to the bloodshed that has marked the city’s history. But even today, it stands firm. Until recently, the fort was under the control of the military. But since February 2017, it has been open to the public as a museum of living heritage. The fortress’s main attractions are a coin museum, an ancient war museum, a haat bazaar, and whispering walls. A unique attraction is Sher e Punjab, a 7D exhibition enhanced by the life of Maharaja Ranjit Singh, which will take you back to the 19th century and leave you with in-depth knowledge. You can also participate in games and live dance shows and win prizes. The various grocery stores in the area will make sure you eat mouth-watering delicacies while visiting the castle. Whether you are a historian, visit this castle for a fun experience.