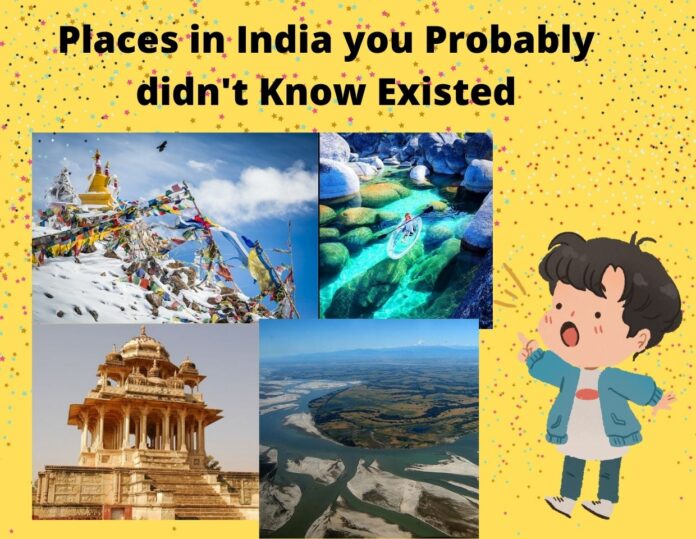 India is known for its beautiful beaches, beautiful cities, deserts, mountains and lakes. Goa parties, Rajasthan temples, and healthy cities of Delhi and Mumbai attract many tourists to India. But what makes India more attractive is the mysterious and unsavory places that miss the traveler’s radar, places like the small state-of-the-art city of Auroville, the suicide of Jatinga birds, and the arousing temples of Khajuraho.India is known as a land of cultures, traditions, food and colors. But it is also known as the world of mystery and history. When it comes to India, there are only cultures, traditions and practices that can only exist in our country. Traveling in India is full of surprises. You will never know what you can see and experience in India.

From scenic beaches, to mountains, India has a lot to offer. But more than that, there are certain things in India that you do not even know they exist. Sometimes mysterious and sometimes sublime, there are other places in India known for their beauty, mystery and culture.Here are somes places in india you haven’t known of their existence:-

The Dawki River is an incredible river located in a small town on the Meghalaya border with clear water. The water is so clear that if you can see it, the boat will appear floating in the air. Not only are the clear waters shocking everyone but also the beautiful rocks, boulders and the many fish floating in the clear blue waters that amaze everyone, making it one of the best places for everyone to visit.

The only floating national park of its kind in the world, Keibul Lamjao National Park is one of the wetlands in Loktak Lake. The home of the brow-antlered deer or sangai, a wild animal of Manipur province, national park is one of the most popular tourist attractions in the country. An unusual sangai or dancing deer can be easily seen here. Apart from that, you can also see pig deer, wild boar, large Indian civet, forest cat and otter, and a few migratory birds, which arrive here between the months of November and March as well as waterfowl. There are two watchtowers and two restrooms inside the park maintained by the Manipur Forest Department. From here, visitors can get a deep sense of the park.

Chaurasi Khambon ki Chhatri is one of the most beautiful places to visit in Bundi. It consists of a dome on the first floor, shaped like an umbrella or Chhatri supported by 16 pillars. The lower level has chaurasi or 84 posts.Historians say that the number 84 symbolizes the cycle of rebirths that humans must go through before they can be saved. This two-story building erected on the platform platform features dazzling carvings of dance figures, elephants, and deer on the base.

Location: Devpura, off the street from Kota.

The Majuli Island of Assam has a world record of Guinness for being the largest river island in the world. According to historical records and legends, the island was rebuilt after a massive earthquake between 1661-1696 that marked the great flood of 1750. place. But as it sounds interesting, this is also the fact that the Majuli began to slowly disappear with the flooding of the Brahmaputra river.

The Cashless and Government less City:-

The city of Auroville is a testing town, located mostly in the province of Tamil Nadu, with parts of the Union Territory of Pondicherry in India. It is a place where people from all over the world come and live together in peace. Aurovilleans as they call themselves, live together in the principles of peace, stability and ‘divine knowledge’ which was the philosophy of Mother (Mirra Alfassa).

Living Root Bridges is another amazing feature found in Meghalaya. These amazing single-deck and double-decker bridges are unique in the world where some root bridges are over 100 feet [100 m] long and extremely strong. These bridges are made of large, intertwined roots that are intertwined to form a bridge that can hold only a few people at a time. The Living Root Bridges are augmented by the Cash and Jaintian tribes who are trained to plant bridges in goods across the high river that flows through the dense forests of Meghalaya. What makes this bridge so special is that these bridges are alive, growing and gaining strength over time.

Khardung La pass is the gateway to some of the most fascinating and untested places. This famous mountain lodge is very popular among adventure seekers and regular tourists alike. Located in the Leh region of the Indian Union Territory, Khardung La is located at an altitude of 5,359 meters. It is recommended to be the world’s largest motor vehicle. Historically, Khardung La is very important as it lies on the main caravan road that connects Leh with Kashgar in Central Asia.During the second world war, an attempt was made to transfer the war to China successfully on this route. Khardung La was built in 1976 and made accessible to public transportation in 1988. The land is maintained by the Border Roads Organization and is very important as it is used to transport goods to the Siachen Glacier.