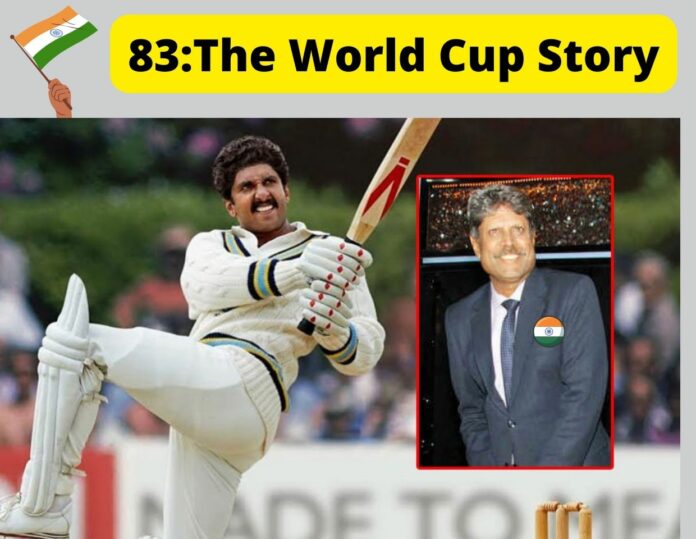 The bollywood film ”83” is based on the 1983 worldcup starring Ranveer Singh,Deepika Padukone,Ammy Virk,Harddy Sandhu and the director of the film is Kabir Khan is set to be releasing on December 25,2021.The film will be released in Hindi, Tamil, Telugu, and Malayalam movie theaters. An upcoming Indian film based on the life of cricket player Kapil Dev. A sports film written on human life directed by Kabir Khan and co-produced by Vishnuvardhan Induri, Deepika Padukon, and Sajid Nadiadwala. The film’s co-production is Reliance Entertainment, Phantom Films, Nadiadwala Grandson Entertainment, Vibri Media, KA Productions, Kabir Khan FilmsRanveer singh stars Kapil Dev and Deepika Padukon as Kapil Dev’s wife. Ranveer Singh holds the position of captain of the Indian cricket team back in 1983 when India won the World Cup by defeating the West indies.
The base of the story is on the 1983 worldcup won by india.The Cast,Release Date,trailer,Where to watch is below:

The 83rd film features the main characters of both emerging and established actors from the Indian cinema industry, without a doubt one of the greatest actors of recent memory.

The Following are the Characters of the Movie 83 as follows:-

Initially, the release date of the film was 10 April 2020 but was changed to December 2020 due to the COVID-19 epidemic in India. However, due to the covid epidemic Reliance Entertainment has announced that the film will be released in 2021. In addition, posters were out but the trailer is expected to be released soon.Audiences are eagerly awaiting the release date, although the date has not yet been confirmed. Stay tuned for more details about the movie “83”. Also, get the latest updates on other movies, tv, and web series.The Trailer Released on 30th november. The Movie will be released on 24th of December 2021 as of the announcement

83 The Movie trailer link is provided above which is the official Youtube Channel link for Reliance Entertainment, where the 83 official movie trailer is released. You can go to You tube directly at this link https://youtu.be/QHdkC6Kn0Io

The much-anticipated ’83 ‘sports film will be released on theaters on December 24, coinciding with Christmas Eve.Recording will begin in England in May 2019, and production will move to various cricket venues in the UK before being completed in October 2019.83 originally to be released in April 2020; however, like many other cinema projects from around the world, it was necessary to delay due to the ongoing coronavirus epidemic. The film will be scheduled and delayed several times, from Q1 of 2021 to last year in June and now to December 2021.83 will be presented in languages available in Hindi, Tamil, Telugu, Malayalam and Kannada.At the time of writing, no major broadcasting platform has publicly guaranteed the acquisition of digital broadcasting rights. However, whatever forum it buys broadcasting rights, fans should expect 83 to appear for the first time online from January 24 – as is the latest trend in the Indian cinema industry.